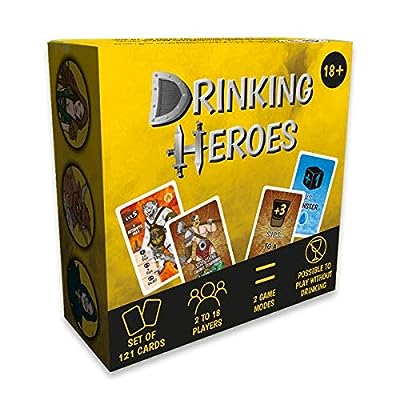 ENGLISH VERSION (June 2019). The Game is Made in France and only available on Amazon France for the moment. THE NEW FANTASTIC DRINKING GAME ! Confront your friends during parties to become the great champion ! AIM OF THE GAME : To win at Drinking Heroes, you must be the player with the most of points when the game ends. You win points according to the Level of the monster you kill. Every turn, roll a dice to fight a monster. Depending on the result, you either kill the monster or have to drink sips. NUMBER OF PLAYERS : From 2 to 18 players. If you are more than 6 players, make teams of 2 or 3 players (6 teams max). FOR AN EVENING WITH OR WITHOUT ALCOHOL : It's possible to play without drinking A player who doesn't drink won't have more than 2 trials max against all MONSTERS to kill them. He/She won't be targeted by SPELL cards that distributes sips. If all the players don't drink, take off all the SPELL cards that distributes sips.