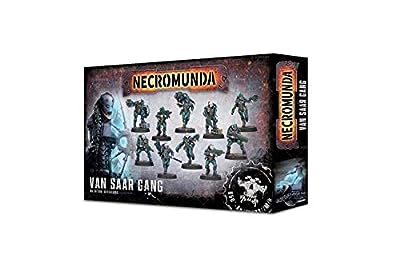 House Van Saar is the technological powerhouse of Necromunda, its artisans and armourers creating the finest weapons and wargear of all the clans.
Their staggering power, however, is built around a dark secret flaws in their understanding of technology that bathe them in radiation and slowly kill them from within.
Assemble a Van Saar gang to use in games of Necromunda: Underhive with this set of 10 plastic miniatures.
Theyve been designed to provide you with a huge amount of variety and options in assembly, meaning every gang can be unique.
Included:
- 2 each of 5 body designs, each wearing armoured bodygloves, which can be assembled in 2 recommended ways:
- Body 1 can be armed with a lasgun and power knife, or a suppression laser
- Body 2 can be armed with a plasma gun and shock stave, or a rad cannon;
- Body 3 can be armed with a lascarbine or a lasgun
- Body 4 can be armed with a combi weapon (lasgun/melta) and Hrystrar pattern energy shield, or a lasgun
- Body 5 can be armed with 2 plasma pistols, or 2 laspistols;
- 20 heads 12 bare, 8 helmeted which can be attached to any body you wish;
- 10 pairs of shoulder pads;
- A selection of grenades, pouches and equipment for adding detail to the miniatures.
Supplied with 10 25mm Round bases, which feature sculpted textures that match the game boards aesthetic.

A set of 10 Van Saar gangers for Necromunda: Underhive, Lots of customisation options, with weapon and head variants, Rules can be found in Gang War 3