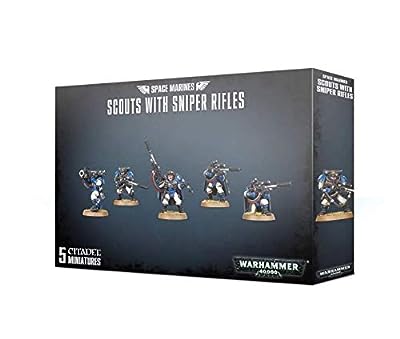 Warhammer 40,000 SPACE MARINE SCOUTS WITH SNIPER RIFLES In the grim darkness of the far future, there is only war Warhammer 40,000 is a tabletop miniature wargame produced by Games Workshop, set in a dystopian science fantasy universe Scout squads are the vanguard of a Space Marine army. Infiltrating behind enemy lines they sow disruption and secure vital strongpoints. Only once a Scout has proven his courage and skill at arms in a Chapter's Scout Company is he elevated to the rank of battle brother, and inducted into one of the Chapter's Battle Dispatched same day from the UK